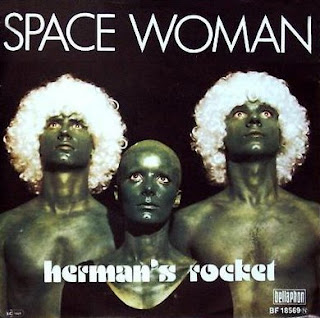 Here's is a crazy LP that most of you probably already know if you have any interest in Space Disco. But incase you don't already know it, here is a 320 rip of this 1977 space disco classic from Herman's Rocket "Space Woman". Featuring Jean-Pierre Massiera, one of the zaniest producers I've heard so far manning the controls. Deep psychedelic space funk that's heavy on the synthesizers. The title track "Space Woman" has the same melody, bass line and overall groove as the smash hit "Miss Broadway" by Belle Epoque (oddly enough it's from the same year). Recommended for serious disco fans, or anybody who just enjoys music that is really far out there. Oh, I'm not sure why, but they are also known as Venus Gang. ...A band so nice they named it twice I guess? Enjoy!