NEW LINK! Be Quiet: Compiled & Mixed by The Cowboys From Sweden (2012) 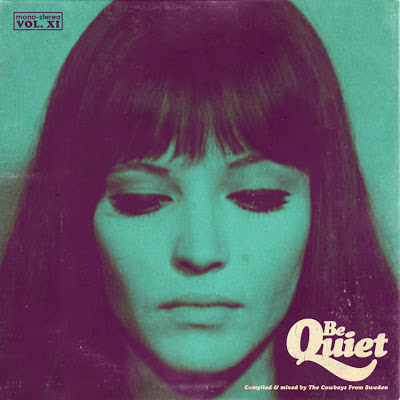 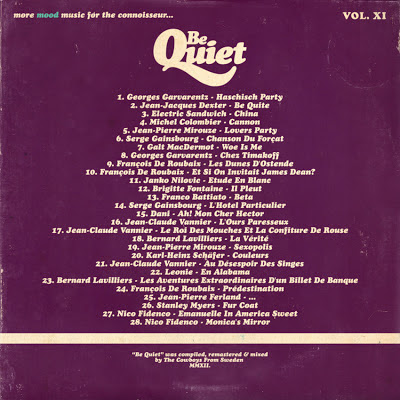 Hello everybody,
it's been a while since my last installment.  Today I am happy to present the eleventh mix by the Cowboys from Sweden!  I have been playing around with this one for nearly a year now and it features some of my favorite tracks of possibly all time (At least a few).  "Be Quiet" (inspired by Jean-Jacques Dexter's "Be Quite" which is not a typo) is another compilation of dark groovy tunes you'll be sure to fall in love with.  This mix starts of a bit aggressive with a lot of heavy drums and percussion, chugging stringed orchestration and exotic instruments (there's even a little dip into some fuzzed-out prog rock by Electric Sandwich).  After the initial build up, the mix takes you down into some dark groovy territory highly dominated by the productions of my favorites François De Roubaix and Jean-Claude Vannier.  Some spacy vocal pop tracks and some instrumentals, this is your typical moody Cowboys listening session.  Many of these tracks including songs by Jean-Pierre Mirouze, Bernard Levalliers, Leonie, Karl Heinz Schäfer and Jean-Claude Vannier have been a big part of our live DJ sets this year, so I am quite pleased to finally put them on a compilation.  There was a lot of chopping and editing going on here, so some of the tracks are only partial just to add to the cinematic experience.  Also to enhance the listen, I did a couple back to back tracks by the same artist (François De Roubaix, Jean-Claude Vannier & Nico Fidenco) to really capture the mood of the artist's work.  Keep your ear out for the insane Vannier produced groove "Ah! Mon Cher Hector" by french vocalist Dani (might be my favorite song I've ever heard).  Other notable tracks to look out for are "En Alabama" by Leonie, which is an alternate vocal version of a Jean-Claude Vannier and Karl Heinz Schäfer arranged track also known as "Je M'Appelle Geraldine" and the super cool synthy yet baroque track "Et Si On Invitait James Dean?" by François De Roubaix featuring a duet between Fred Pallem and Juliette Paquereau. Towards the end of the mix there is a breathtaking duet between François De Roubaix and Elisabeth Teissier called "Prédestination"; A cosmic astrology-centered love ballad with some of the grooviest drums, basslines and synthesizers I've heard in ages.  I might also recommend that you check out the recent vinyl reissue of Jean-Pierre Mirouze's ultra groovy soundtrack for "La Mariage Collectif" that was featured on this mix twice with "Lovers Party" and the holy grail "Sexopolis" (originally released on 7" as a B-side to the pop song "Together", these two tracks where the only songs that ever got released from this soundtrack until now).  Anyway, I could keep going on, but I don't want to spoil all the fun of actually listening to the mix.  Hopefully you all enjoy the mix as much as I did making it...

Comments are appreciated.  Thanks.