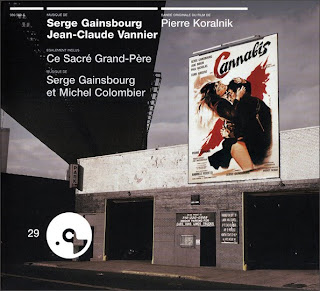 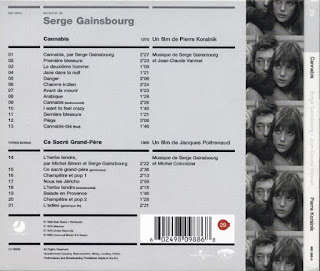 This is the score to Pierre Koralnik's 1969 film Cannabis. The film was titled "French Intrigue" (also "The Mafia Wants Your Blood") for the US release. Not only did Serge Gainsbourg compose the soundtrack (in collaboration with Jean-Claude Vannier), he also starred in the film with his wife Jane Birkin. This is one of my favorite of Gainsbourg's soundtracks, full of amazing grooves, break-beat drums, harpsichord, huge guitar riffs and funky bass lines. The film it's self was pretty slow and kind of corny actually, but worth it to see Serge shooting up gangsters with a tommy gun in an enormous chicken coop. The music is much better than the film. It's definitely worth the download....

Also, this 2003 reissue includes the soundtrack to the 1967 film "Ce Sacre Grand-Pere" or "The marriage came tumbling down" which Gainsbourg co-wrote with Michel Colombier. I haven't seen this film, so I won't try and fake my way through a review. Musically however, the soundtrack is not as funky as Cannabis, but has some very nice moments and some dark and pretty instrumentals. A bit more orchestral, but still has the Gainsbourg touch. Beautiful. 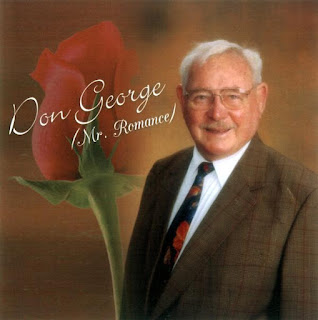 Awesome... This is singer/actor Don George's album "Mr. Romance". Don George happens to be my band mate Robbie Augspurger's grandfather and all around good guy. This is a karaoke album Mr. George cut back in 2004 at a professional recording studio. The songs are mostly covers of Sinatra, Ray Charles, stuff like that. Stuff he likes to sing. Don had a cold when he recorded this, so he claims that it's not his best work, but it sure has a lot of character... He also claims that he is a 9000 year old dracula. Just kidding, that's not true, I made that part up. The music is Don's voice backed by expensive midis. Not sure there is anything else I can say about it. Cool, I'm glad I posted this. 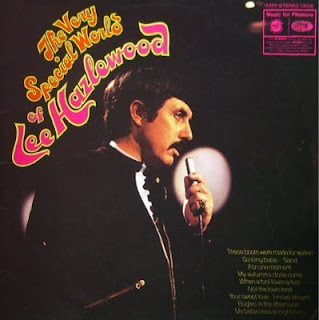 This is Lee's 1966 album "The very special world of Lee Hazlewood", which seems to be sort of his first best of compilation. This record features many of my favorite Lee Hazlewood songs: "Sand", "My Autumn's Done Come", "Your Sweet Love', "For One Moment", they are all awesome... Get this if you are into over the top lush orchestral cowboy psychedelia.

Download Link:
http://www.mediafire.com/?cb4zldb1ljo
Posted by Nature Film at 1:03 AM 2 comments: