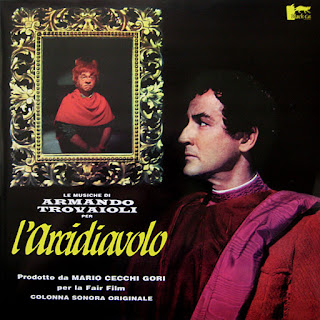 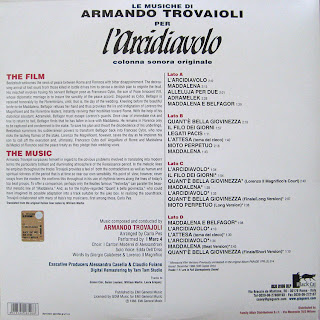 Here is a crazy soundtrack I picked up a few weeks ago. This is Armando Tovajoli's score for the 1966 comedy period peice set in renaissance times called "L'Arcidiavolo" or "The Devil In Love". I have not seen the film (I believe it's out of print), but despite the strange/deceptive album cover this is a fantastic LP. To be honest, based on the cover I was expecting renaissance or medieval music. Now, while this music references renaissance melodies, the soundtrack is surprisingly up-tempo and funky. There are Religious overtones to the songs, but in a weird party kind of way. Lot's of break beats, pick-bass, harpsichord, choir, and organ. Arranged by Carlo Pes and performed by I Marc 4 (The band who played about on 99% of Trovajoli's soundtracks), Edda Dell'Orso and I Cantori Moderni Di Alessandroni (Alessandro Alessandroni's modern choir). I took the time to rip both vinyl discs for you, so I think it goes with out saying that this is highly recommended. I haven't seen it posted anywhere else yet, so enjoy and feel free to share it. Ripped at 320 Kbps. Disc one is the soundtrack and disc two is alternate film versions presented in mono.