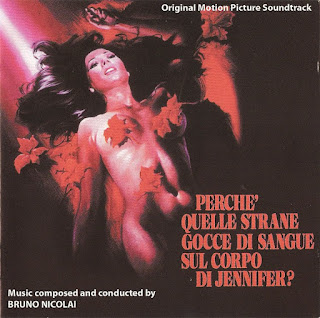 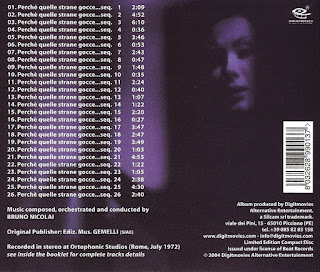 Attention giallo fans! Here is the soundtrack to the 1972 film "Perche Quelle Strane Gocce Di Sangue Sul Corpo Di Jennifer?" (I love how long giallo titles get!). Alternate English titles include "The Case of the Bloody Iris" and "What Are Those Strange Drops of Blood Doing on Jennifer's Body?". The film was Directed by Giuliano Carnimeo and stars a more often than not turtle-necked George Hilton and the lovely Edwige Fenech. The soundtrack was composed by Bruno Nicolai and features some top shelf arrangements, which raises the question: why is this soundtrack so obscure? I've never seen this full soundtrack online before anywhere. ...This is Bruno at his best! The soundtrack is full of catchy main title themes, light and breezy bossa novas, a couple of darker widescreen grooves and plenty of orchestral suspense and black leather-gloved killer themes. The soundtrack also features one of my personal favorite pieces of music I've ever heard in a giallo film which was also included in the trailer; the beautiful but drum heavy "Jennifer's Recall" which was just used on the "Sound Selections" mix tape by The Cowboys From Sweden. A steady breakbeat paired with a dark and groovy bass line, that sits on top of a sea of minor key string harmonies that flow in and out of each other effortlessly in an almost non rhythmic sort of way. I'm not sure how it came to be, but is is truly a beautiful piece of music. Highly Recommended! 320 Kbps!

PS. Not sure why the CD track listing doesn't have song titles, but anyway, the Mp3s do... Enjoy.

Comments are appreciated.
Posted by Nature Film at 3:59 AM 8 comments:

"Sound Selections" - Compiled & Mixed By The Cowboys From Sweden (2010) 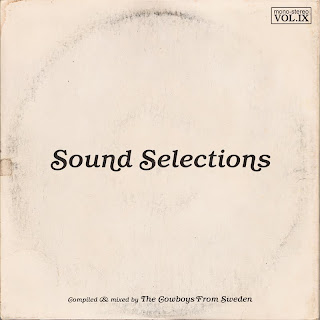 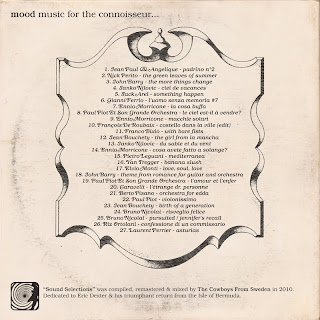 It's finally here: "Sound Selections" the ninth mix tape by the Cowboys from Sweden. Seems like I have been working on this one for almost a year now. Sound Selections is the first mix in the series to feature exclusively instrumental tracks with a heavy emphasis on the darker and prettier side of vintage European Library and Cinema music. Now if you already follow the genre a bit you should understand that "instrumental" doesn't imply no vocals, but no lyrics rather. The mix is a pretty even 50/50 split of Library tracks and movie themes. The over all sound is largely darker classical influenced melodies, heavy on the bass, heavy on the strings, heavy on the drums... Very introspective and quite serious in mood. Since this mix had a bit more of a specific direction than usual, I allowed myself to include some old favorites that are more diliberate nods to Giallo and Poliziotteschi films. For instance Ennio Morricone's theme to Massimo Dallamano's 1972 film "What have you done to Solange?" and the insanely beautiful "Pursuited/Jennifer's Recall" by Bruno Nicolai from "The Case of the Bloody Iris" and of course the genre defining Cop track "Confessione Di Un Commissario" by Riz Ortolani from the gratuitously titled "Confessione di un commissario di polizia al procuratore della repubblica" starring the always awesome Franco Nero.. To sum it up, be expecting a beautiful ride with a few minor detours into more specifically "Film" music territory. Not sure what else to say, I'm sure you'll enjoy it. The mix runs one hour and seventeen minutes and has been remastered for optimal sound quality. 320 Kbps